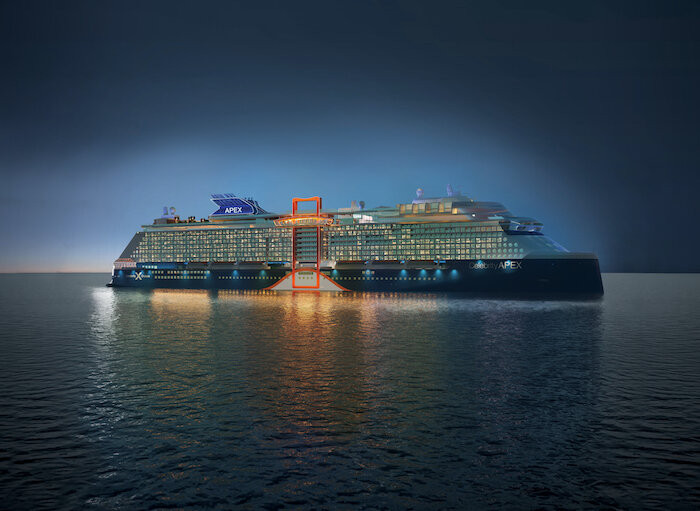 Setting sail in April for a programme around the Mediterranean, Celebrity Apex will be the sister ship to the Celebrity Edge and is set to include a number of innovative features that will wow guests from the moment they step onboard.

Chief amongst them is 'The Magic Carpet', which debuted on Celebrity Edge when it launched in late 2018. A moveable deck on the side of the ship, the Magic Carpet has been designed to serve a variety of purposes during the course of a cruise - from exclusive dining at its highest point on Deck 16 to the extension of a bar when lower on Deck 5.

It also serves as a walkway on Deck 2 to access tender boats when the ship is unable to head into a port during a cruise.

In terms of accommodation, Celebrity Apex will include the two new types of room that debuted on Celebrity Edge, with the Iconic Suite being the most spacious in the Celebrity fleet and six impressive Edge Villas being split across two levels.

A number of cabins will feature Infinity Balconies, with floor to ceiling sliding glass doors that allow you to bring the outside, inside.

Enjoy entertainment from the likes of the American Ballet Theatre, dine from a wide range of more than 20 restaurants or sit back and relax on the Rooftop garden on deck. No matter whether you are travelling as a couple, or as a family, there is little doubt that you’ll be in for a special treat from the moment you set sail until you dock at the end of your journey.

Celebrity Apex is scheduled to take to sea in April on its first journey from Southampton ahead of a summer season in the Mediterranean, before moving to the Caribbean for the winter.

Iona will become the latest addition to the P&O Cruise fleet when it is launched, and will take over from Britannia as the largest ship sailing in P&O colours.

In fact, it will become the largest ship to be purpose built for the British market, and will also be one of the most environmentally friendly thanks to the fact that it will run on Liquefied Natural Gas.

At the heart of the ship will be the giant SkyDome, which will sit above the main atrium and will flood the ship with natural light. Below there will be a range of facilities that include a pool as well as various bars and restaurants. When the sun goes down, the swimming pool will be transformed into a stage, meaning you can be entertained under the stars no matter what the weather may be like.

As a special treat, Gary Barlow will be heading aboard Iona this year in his new role as an ambassador for the cruise line.

In line with the remainder of the P&O fleet, there will be no shortage of dining options thanks to a total of 30 food venues that offer everything from takeaway quick bites to small plate fine dining, whilst there are plenty of facilities to cater for the needs of guests of all ages.

Iona will also feature a world first, with the ship having the unique feature of its own distillery where a number of exclusive gins will be created in collaboration with Salcombe Gin - with the maiden production of the gin being distilled, bottled and labelled on board.

Iona will set sail on its first voyage in May, and will spend the season sailing from Southampton to the Norwegian Fjords.

Odyssey of the Seas

Odyssey of the Seas will be the second ship in Royal Caribbean’s 'Quantum Ultra' class, and will be the first vessel in the class to sail in European waters when it heads for the Mediterranean.

Set to launch towards the end of the year, Odyssey of the Seas has been designed with fun firmly in mind, which can be seen in the wide-ranging list of facilities to be found onboard - which include the Virtual Reality bungee trampolines in the SkyPad to the popular iFLY Skydiving, and from the North Star viewing pod to a splash pool and bumper cars for the kids.

Youngster could even see if they have the skills required to join the circus with a trip to the trapeze school.

The innovative Two70 entertainment will make an appearance, with two storey high windows that are transformed into giant screens on an evening to make the area a large multimedia theatre. Similar technology will be utilised to provide a 'virtual balcony' for some people travelling in interior rooms, who would otherwise not benefit from the stunning views available at sea.

A number of other ships are set to launch during the year ahead, including the Enchanted Princess, which will be the fifth ship in Princess Cruises’ Royal Class. The ship will sail around the Mediterranean after its maiden voyage and will be home to the largest balcony seen at sea - running for over 1,000 square feet around the impressive Sky Suites.

MSC’s new Virtuoso will join the Grandiose in being one of the largest ships to sail in MSC colours and will introduce two new Cirque du Soleil shows to wow visitors, whilst the modern day Mardi Gras - which shares its name with one of the first ships in the Carnival Cruises fleet - will feature six themed areas packed with things to do and places to eat, as well as BOLT, the first ever rollercoaster at sea.